In Bangladesh, the micro:bit is being introduced to district libraries through Libraries Unlimited, a five-year project run by the British Council Bangladesh and supported by the Bill & Melinda Gates Foundation & Microsoft. 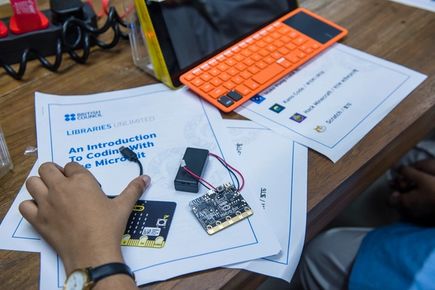 The pilot project provides access to micro:bits, library workshops and introductory activities for children. Each workshop is attended by a number of volunteers who help give practical support to the children. The pilot phase of the programme reached 18 districts and 2,000 children aged between 8-15 years. The workshops, which offer hands-on coding and computing activities using micro:bit & Kano computers, indicated a hugely positive impact: 95% of children would be interested in learning more coding in the future.

“A key vision for Libraries Unlimited is to transform public libraries into hubs of the community and centres for interactive learning – places wheremembers of the public can come to learn, develop skills and participate in activities and events. One component of this will be the introduction ofresources which allow library users, particularly young people, to learn basic computer coding." - Libraries Unlimited

Bangladesh’s context as a developing country mean children often have either limited or no access to technology. The programme’s main aims are to address this gap in access by reaching children beyond the urban centre of Dhaka; to offer children an introduction to programming and coding and to hopefully ignite a passion in STEM.

Lessons involve introductory activities and introduction to the micro:bit with Scratch. Students are given access to a micro:bit and a set of instructions developed by the LU team. Each workshop is attended by a number of experienced volunteers from BdOSN who help the LU team in assisting the children with their activities.

The pilot phase of the programme reached 18 districts and nearly 2000 children aged between 8 -16 years. The workshops indicated a hugely positive impact: 90% of children said they would use the library more if these workshops were on offer.

Over the next two years, the programme aims to impact at least 175,000 chiildren in all 64 districts of Bangladesh. British Council Bangladesh will also begin to incorporate a micro:bit element to their EDGE programme from October 2019.

The programme organisers recognise the importance of engaging local support to drive the awareness and interest in Libraries Unlimited, in order to support the programmes' sustainability and long-term success.