do your :bit winners

Well done to Success, Chris-Jacob and Sharon. After realising that underwater pipe-line vandalism caused terrible harm to life under water, this team created an alarm as their solution towards achieving Global Goal 14 and reducing oil spillages.

Sharon, Chris-Jacob and Success used a combination of the micro:bit radio function and motion sensor to warn oil companies of potential vandalism of their pipes. The micro:bits are attached to the oil pipes in waterproof casings and, using their motion sensors, are activated if the pipes shake. Once activated they will send a radio signal to another micro:bit above water, causing that micro:bit to sound an alarm and alert the oil company to potential danger.

The judges were impressed that the team had created a really imaginative solution to a local problem in the southern communities of Nigeria. 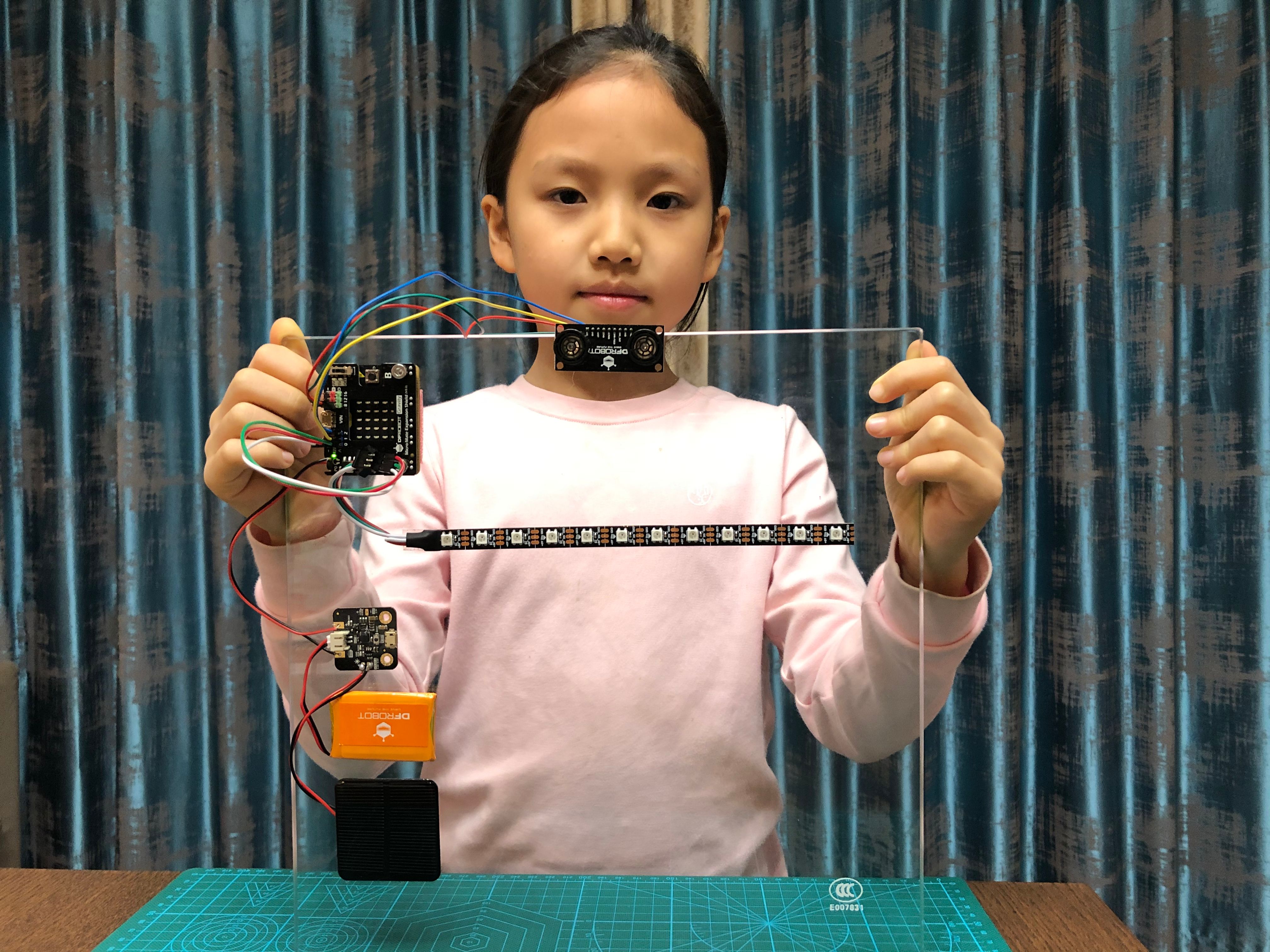 Anqi used a micro:mate board alongside a micro:bit to connect with an ultrasonic distance sensor that detects the distance between the glass and any object approaching it. When the object is within a certain range of the glass, a signal is sent via wires to LEDs on the glass. The LEDs flash and make the bird aware that the glass is there. 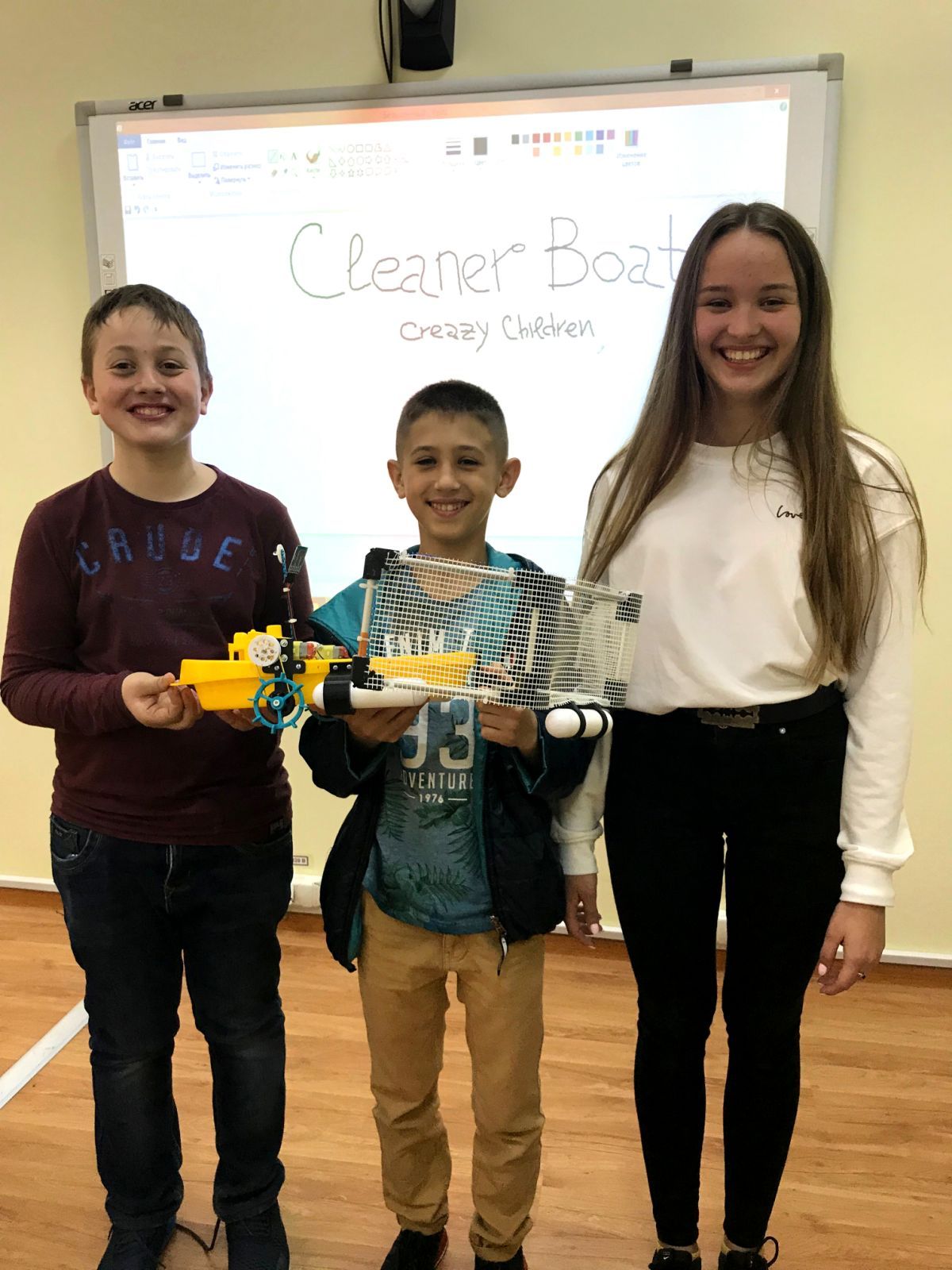 ​​This impressive 3D printed cleaner boat is designed to help clean a polluted river near where the team live, that has become polluted. The project to help clean up the local river involved the whole school and Danylo, Oleksandra and Volodymyr worked hard to create a protoype in their robotics class. They even updated the prototype after it was tested to make it more efficient. ​​

The judges loved how the project involved the entire school and was targeted towards finding a solution to a very local problem. 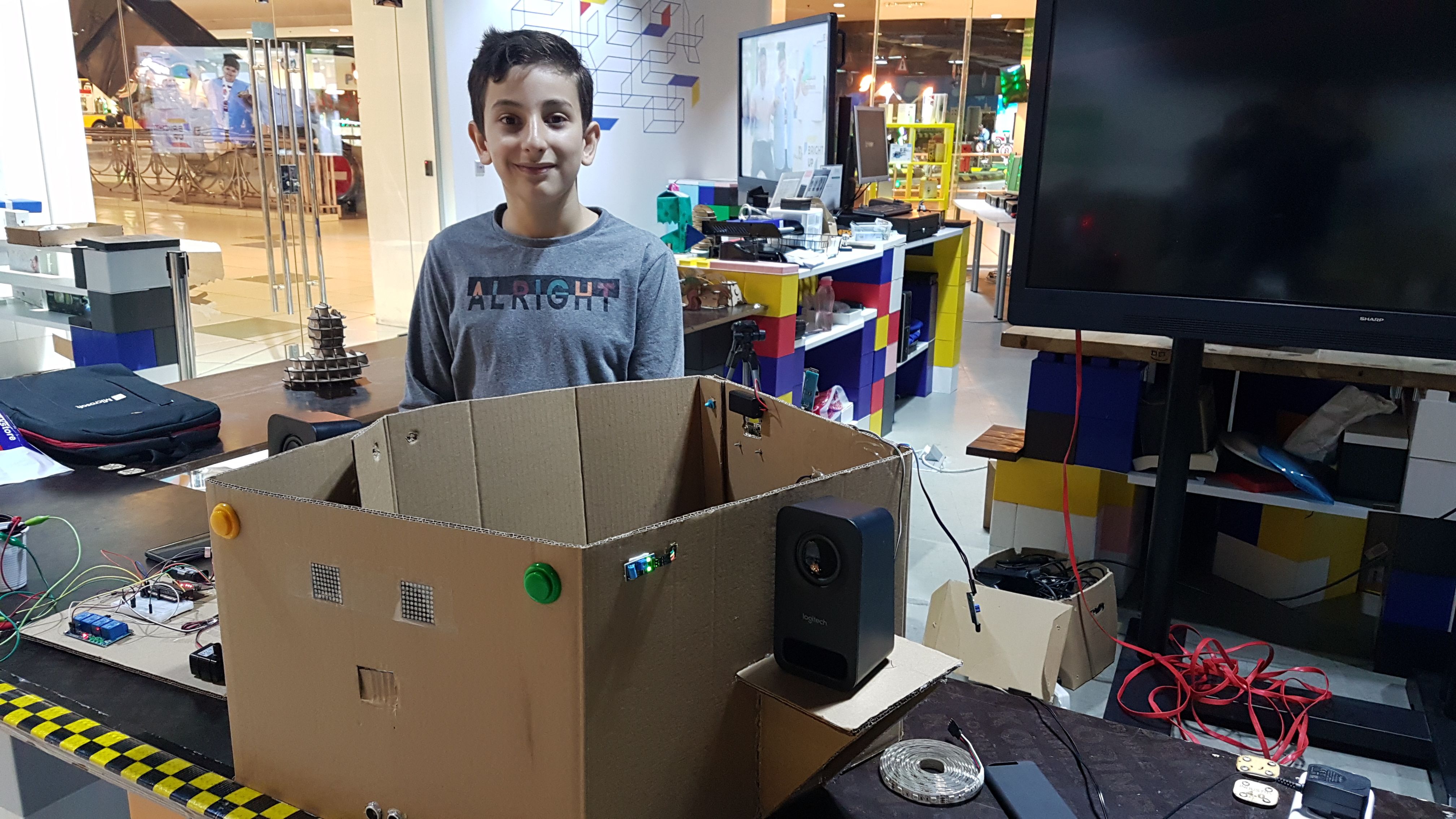 ​​Zayd wowed the judges with his complex Z Palm Tree creation. This creative and innovative solution towards Global Goal 15, Life on Land, would enable a tree to ‘communicate’ its needs.

Zayd has used multiple external and internal sensors to create the Z Palm Tree, including a vibration sensor to sense the tree being cut down, a flame sensor to detect the tree being burned down, a moisture sensor in the ground to detect water level and the internal temperature sensor to approximate the air temperature. With the results recorded by the sensors, the Z Palm Tree uses Bluetooth to connect to an app created by Zayd which will warn the user if the tree needs more water. It connects to the same app via the internet to warn the user of a fire, and uses speakers to give information on the air temperature, to shout for help if being cut down and to warn anyone nearby if there’s a fire. But the features of Zayd’s creation don’t stop there. He has also connected a water pump to the app so that the user can click a button to water the tree, and has used a servo and two LED matrices to create a face that shows emotion and moves its mouth when talking. 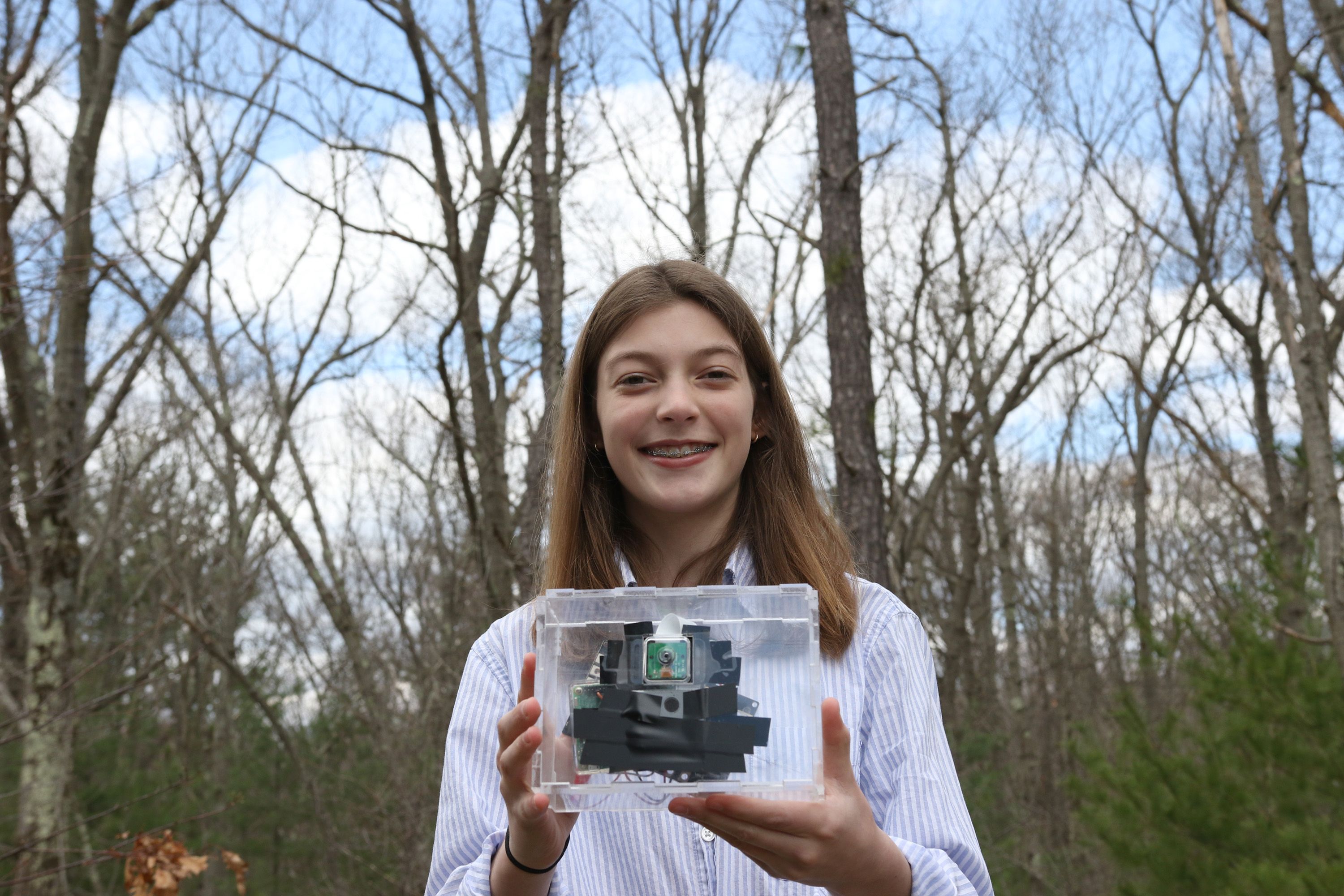 Lynn created a complex device as a solution towards Global Goal 15, Life on Land.  ​​With this creation, Lynn aims to not only solve the issue of deforestation, but also raise awareness of it. ​​

Lynn has used a gator:microphone, a camera and a Raspberry Pi to detect loud sounds in forests. The gator:microphone is connected via wires to a micro:bit that it receives its code from, and a Raspberry Pi that receives a signal when a sound has been detected. It then automatically takes a photo and posts it to a public Twitter account for a park ranger to review. The use of Twitter raises awareness of the issue of deforestation with the local community.

The judges were all impressed with Lynn's unique and comprehensive response. 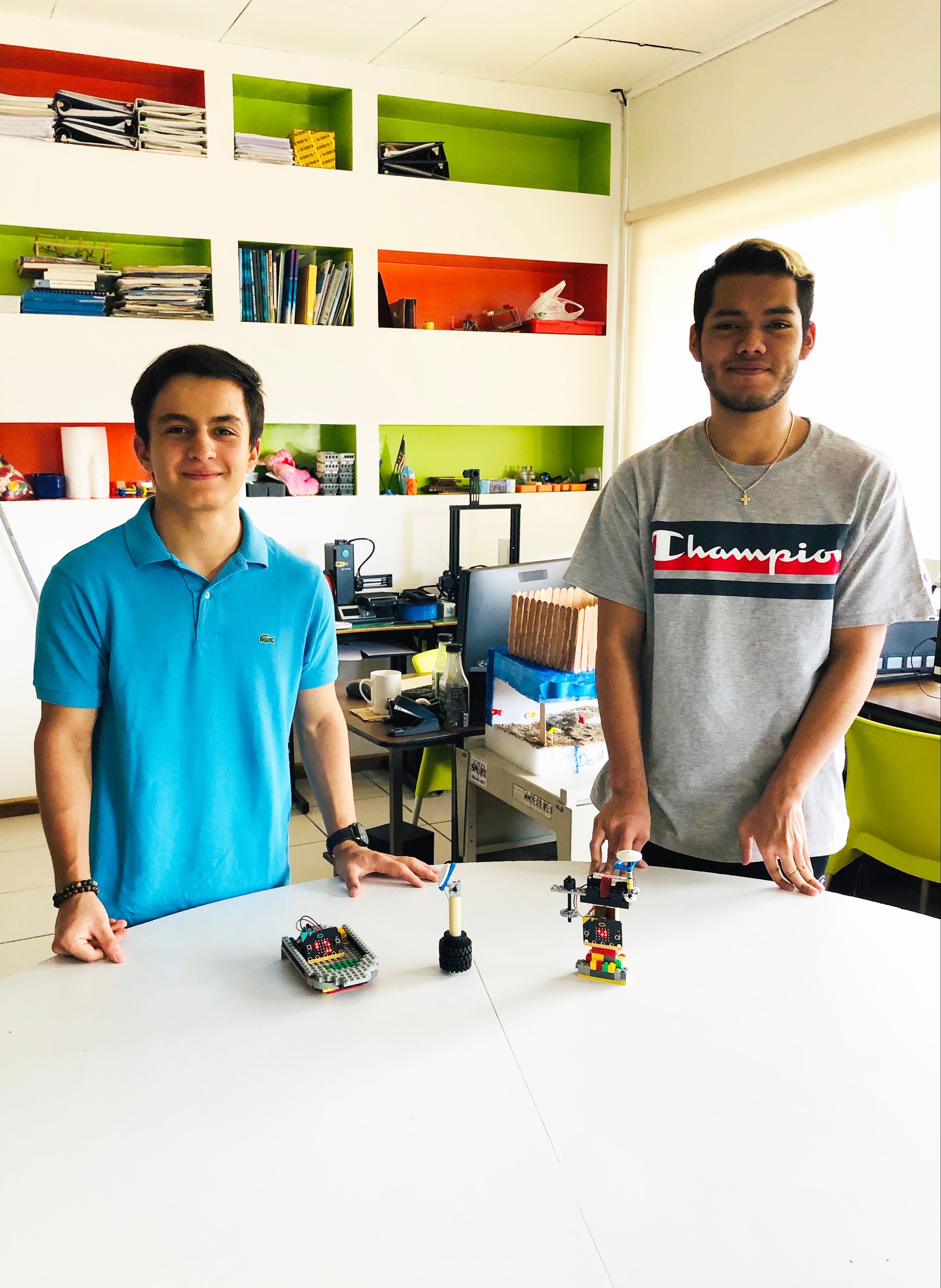 Mauro and Jan decided to work together to create a solution after realising that hammerhead sharks are in danger in the island of Isla de Cocos in Costa Rica where they live.

The judges thought it was a really well thought through idea and multichannel solution.

AFRICA: Happyness, Steven and Janeth, Tanzania - 'Providing lights in rural areas'. This team project aims to ensure that people in Tanzania can access electric lights in the evenings.

EUROPE: Plamena, Bulgaria - 'Save the Brown Bear'. This project aims to protect the 16 Brown Bears that live nearby by creating a safety collar and making use of the micro:bit radio function. 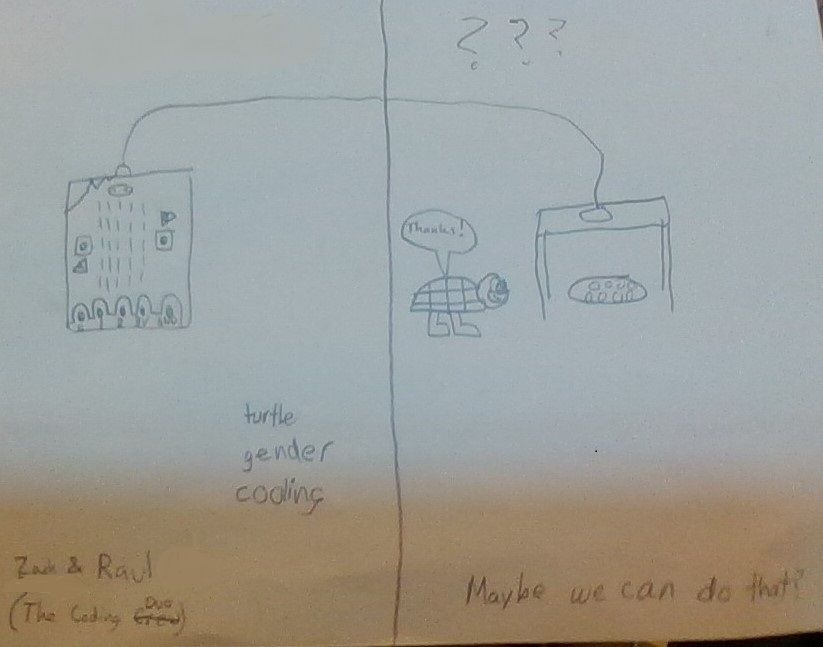 The judges wanted to give a special mention to Raul and Zach from America for their creation - The Sea Turtle Gender Cooling system!

Raul and Zach want to prevent Sea Turtles from becoming extinct by ensuring that there are enough male turtles in the world to mate. They read that if a turtle egg incubates above 30C the turtle hatchling will be female but if it goes under 27C, they will be male.

Raul and Zach have created a system that can cool or heat the turtle nest to determine the turtles' gender.

Matt Larsen-Daw from the WWF-UK thought the idea was really innovative and wanted to give the team a special mention. He said:

“This project really stood out for us as being based on a real knowledge of - and love for - the science of the natural world. In a world that is changing faster than many species can adapt, innovative ideas founded in science like this will be pivotal for conservation organisations such as WWF if we are to protect wildlife populations and restore stability to the planet.”

Well done to all of our winners and runners up!